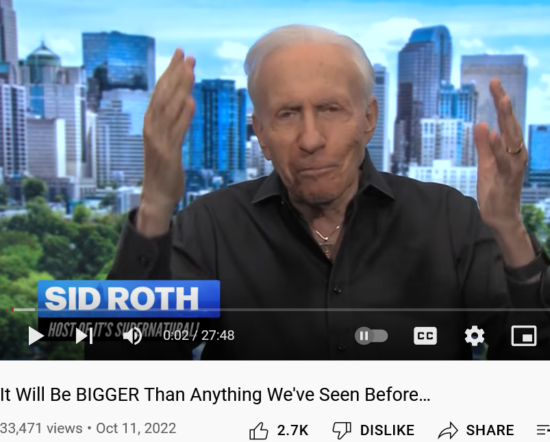 As a whole, Sid Roth has a love for Jesus and wants to see his Jewish people, and all people saved. He goes about doing that with “signs and wonders” which are the two things the deceiver uses today:

24 For there shall arise false Christs, and FALSE PROPHETS, and shall shew GREAT SIGNS and WONDERS; insomuch that, if it were possible, they shall DECEIVE the very elect. (Matthew 24, Mark 13:22, 2 Thes.2:9)

Jesus said it was wicked people who seek for signs:

39 AN EVIL and adulterous generation SEEKETH after A SIGN; (Matthew 12)

The only pursuers of signs and wonders today are tongue talkers, which go unchecked because no one ever gave them instructions, boundaries, or any kind of checks for the proper use and potential misuse of tongues. (I have yet to hear a single tongue talker warn of deception). Is he not aware that witches and demons use tongues every day??

“But our tongues are different,” some may say. You don’t know what you’re saying. Do you follow these guidelines given by Paul?

27 If any man speak in an unknown tongue, LET IT BE BY TWO, or AT THE MOST BY THREE, and that by course; and let one interpret.
28 But if there be NO INTERPRETER, let him KEEP SILENCE in the church; (1 Corinthians 14:27–28)

Today on YouTube once more, Sid taught conflicting doctrine. He began by welcoming the “Holy Spirit”:

Then proceeded to differentiate between the glory of each member of the Godhead:

Then defined the word glory as “presence”:

Sid is partly right about the last move of God being not “more of the Holy Spirit” but the “Spirit of God“—big differences! Most people don’t know this, because tongue talkers are consumed in their pursuit of the third member of the Godhead.

About the only person to get this right was the late Percy Collett, who spent eight days in Heaven with Jesus, giving him a tour with explanations of the future. He was shown that the Spirit of God the Father would come down for the last move, NOT more of the Holy Spirit!

So why are so-called “Spirit-filled” Believers—as shown by their tongue speaking—not clued in on this? Isn’t the spirit in them parting the truth correctly? No, largely because the spirit dwelling in them is the “signs and wonders” spirit of deception, keeping them on the wondrous hamster wheel of unknown tongues:

13 For such are FALSE APOSTLES, deceitful workers, transforming themselves into the apostles of Christ.
14 And no marvel; for SATAN himself is transformed into an ANGEL of LIGHT.
15 Therefore it is no great thing if his MINISTERS also be transformed as the MINISTERS OF RIGHTEOUSNESS;  (2 Corinthians 11)

Once you discern this type of Satan—the cunning, God-loving, praise and worshipping, signs and wonders Satan, then you can substitute the word “unknown” for “deceiving tongues.” Despite Sid’s one-time acknowledgment of the last move being different and of God the Father’s Spirit and Presence, he has offered no clear teaching on it, on how to grow it—it’s still “tongues, tongues, and more tongues.”

For anyone who wants to know how to Quicken the Spirit of God that is already within them, read: Quicken Within and Tongues.

“We’re coming into a time in history that it’s going to be the worst time in the history of planet Earth.” (@4:39)

He’s right about that, but what has the spirit that is in him done about it to prepare Believers for it? NOTHING! Because that spirit just told him to tell the whole world the following about it—without qualification:

“But it’s going to be the best time in your history because YOU WILL BE JUST LIKE MOSES you’ll have all these plagues and things coming at you NO WEAPON FORMED AGAINST YOU IS GOING TO PROSPER (@4:49)

Don’t be fooled by this imposter. What about food shortages, the high energy costs or lack of fuels, and on and on it goes?

13 Then said I, Ah, Lord God! behold, the PROPHETS SAY unto them, YE SHALL NOT SEE THE SWORD, NEITHER SHALL YE HAVE FAMINE; but I WILL GIVE YOU ASSURED PEACE in this place.
14 Then the Lord said unto me, THE PROPHETS PROPHESY LIES IN MY NAME: I SENT THEM NOT, neither have I commanded them, neither spake unto them: THEY PROPHESY UNTO YOU A FALSE VISION and divination, and A THING OF NOUGHT, and the DECEIT OF THEIR HEART.
15 Therefore thus saith the Lord concerning the prophets that prophesy in my name, and I sent them not, yet they say, Sword and famine shall not be in this land; BY SWORD AND FAMINE SHALL THOSE PROPHETS BE CONSUMED. (Jeremiah 14)

Please pay attention to the Word:

7 And it was given unto him to make war with the saints, and to OVERCOME THEM (Revelation 13)

12 HERE IS THE PATIENCE OF THE SAINTS: here are they that keep the commandments of God, and the faith of Jesus. And I heard a voice from heaven saying unto me, Write, BLESSED ARE THE DEAD WHICH DIE IN THE LORD FROM HENCEFORTH: (Revelation 14)

If you live in a big city, get the hell out! Do all you can to prepare for what Sid has finally, partially, conceded—the worst of times are just ahead!